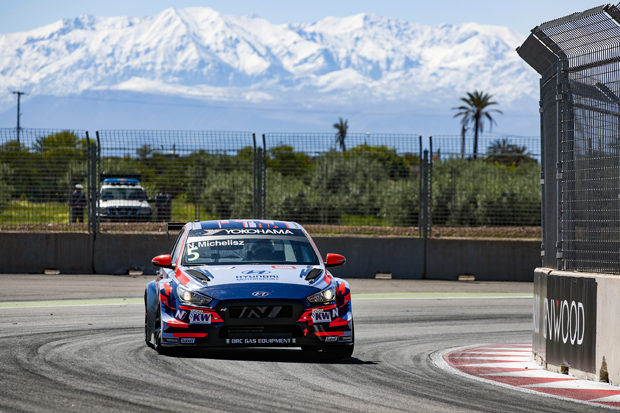 Thed Björk has won the final race of the weekend in Morocco, and taken both the championship lead as well as the first victory for the Lynk & Co brand in motorsport on its competitive debut.

Comtoyou Racing’s Frédéric Vervisch started from pole position in his Audi RS 3 LMS, but the Belgian dropped behind both the Lynk & Cos of Yvan Muller and Thed Björk at the start.

Further behind, there was drama at Turn 3, as the two Hondas of Tiago Monteiro and Esteban Guerrieri, and the Lynk & Co of Yann Ehrlacher went three-wide into the corner, with Monteiro unable to turn in with Guerrieri up his inside and knocked Ehrlacher’s car into the barriers, with both cars out on the spot with damage.

The safety car was deployed for six laps before the race restarted, with Muller pulling away from Björk, who was forced to defend against the Audi of Vervisch, who also had the fast-starting PWR Racing Cupra TCR of Mikel Azcona on his tail.

Everyone was holding station until lap 14, when Muller’s car slowed out of the lead with broken steering, while the BRC Racing Hyundai of Augusto Farfus, running in ninth, stopped on track with a broken gearbox but was quickly recovered up the escape road.

Björk was now leading but still holding back Vervisch’s Audi, but he got a reprieve when the race finished under the safety car when Jean-Karl Vernay, running in fifth in his WRT Audi RS 3 LMS, dramatically crashed out with total brake failure at Turn 7, going backwards into the tyre barriers.

The next round of the championship takes place at the Hungaroring near Budapest in three weeks’ time.